Dr Mahamudu Bawumia: Will he be retained at Jubilee House? 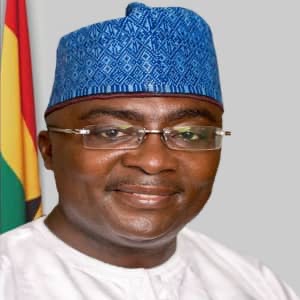 Accra, Dec.06, GNA — The Ghanaian electorate have over the past four years witnessed how the Vice President, Dr Mahamudu Bawumia, has partnered the President to pursue his vision for  building a nation not dependent on  aid. As they go to the polls on Monday, December 7 to elect the Eighth President of the Fourth Republic, will they choose to retain him, with President Nana Addo Dankwa Akufo-Addo, to drive their transformation agenda for four more years?

An astute economist and banker, many critics say he has distinguished himself as the Vice President of the Republic of Ghana over the past four years.

He has, over the last four years, endeared himself to both ardent supporters and sympathizers of the ruling NPP and the “neutrals” within the political space.

Dr Bawumia has championed the Government’s digitisation agenda to make the Ghanaian economy financially-inclusive and expand the tax net to the informal sector of the economy.

Some of his admirers have nicknamed him “Digimia” and “Walewale Adams Smith” for his passion to digitise, transform and formalise the economy so that the nation does not miss out on the Fourth Industrial Revolution.

He heads the Government’s Economic Management Team, which oversees the macro-economic management, which has done an incredibly good job – stabilised the nation’s currency, the cedi, against the major trading currencies, brought down inflation from 15.4 per cent in 2016 to a single digit before the emergence of the COVID-19 pandemic.

The annual growth rate of 3.6 per cent has improved to an average of seven per cent while the average 1.6 per cent of annual GDP per capita growth increased to 4.7 per cent under his leadership.

Again the country’s 1.1 per cent average annual growth rate of exports has risen to 14.9 per cent.

The annual manufacturing value-added growth rates of 2.1 per cent has increased to an average of 6.7 per cent thereby creating fiscal space to implement various social interventions during the COVID-19 pandemic.

He spearheaded the rolling-out of the National Property and Digital Addressing System, with more than seven million houses tagged with their property addresses.

Ghanaians are now able to transfer money from their bank accounts to their mobile money wallets seamlessly and vice versa and to also transfer across all mobile money operators without any difficulty.

The goal is to ensure a cashlite society and financial inclusion.

The Vice President launched the Universal Quick Response (QR Code) System on March 25, 2020, and demonstrated how one could use it to purchase any item on November 19 when he bought Waakye at Auntie Muni’s Waakye Joint at Ridge, in Accra.

The system is a new and easy way to make payments to a merchant by scanning the QR Code displayed by a merchant with their mobile phone and the merchant gets the money instantly.

Ghana is the first country in Africa to introduce the QR Code and third in the world after Singapore and India.

The Vice President on November 21,2020 unveiled Free Wi-Fi or Internet service for 13 public tertiary education institutions at the new Campus of the Ghana Institute of Journalism (GIJ) Dzorwulu, Accra, to enhance teaching, learning and research.

The Free Wi-Fi is a pilot project ahead of plans by government to connect all public senior high schools to free internet service.

Involvement in Sinohydro Deal in China

Vice President Bawumia led a delegation in 2017 to China to negotiate for a two-billion dollar Bauxite-Barter Arrangement under the Sinohydro Master Project Support for the country’s infrastructural development.

Vice President Bawumia, being a devout Muslim and concerned about the welfare of Zongo Communities, took special interest in securing scholarships for 40 Zongo students comprising 20 females and 20 males to study medicine in Cuba.

He has supported the construction of many Makaranta and mosques across the country using his personal financial resources and donation of bags of cement.

Vice President Bawumia, over the past three and half years, has been an advocate for cured lepers and has been giving support to them through the donation of assorted food items to the Weija Leprosarium.

He has built a two- bedroom house for an 82-year old cured leper, Madam Daari Pogo. The old woman had been abandoned by her family and was sheltering in a dilapidated mud house at Motori in the Wa West District of the Upper West Region.

This humanitarian gesture exhibited by the Vice President has been hailed by many Ghanaians.

Dr Bawumia joins Reverend Father Andrew Campbell of the Christ the King Parish of the Catholic Church every year to celebrate the ‘Soup Kitchen,’ a platform to interact with street children and source funding for their upkeep and acquisition of vocational skills.

Dr Bawumia was born on October 7, 1963 in Tamale to Alhaji Mumuni Bawumia, former Chairman of the Council of State (1992–2000) and Hajia Mariama Bawumia.

He was born into a large family; the 12th in line of his father’s 18 children and the second of his mother’s five.

His father, a teacher, lawyer and politician, was also a royal and served as Paramount Chief of Kperiga in the Northern Region.

Dr Bawumia is married to Samira Ramadan Bawumia, the only daughter of Alhaji Ahmed Ramadan, a former National Chairman of the People’s National Convention (PNC). They are blessed with four children.

He attended Sakasaka Primary School in Tamale and gained admission to the Tamale Secondary School in 1975. He was President of the Ghana United Nations Students’ Association (GUNSA) in 1981. After his second cycle education, he went to the United Kingdom where he studied Banking and obtained the Chartered Institute of Bankers Diploma (ACIB).

From 1988 to 1990, Dr Bawumia worked as a lecturer in Monetary Economics and International Finance at the Emile Woolf College of Accountancy in London, England. He also served as an economist at the Research Department of the International Monetary Fund in Washington DC, USA. From 1996 to 2000, he served as an Assistant Professor of Economics at Hankamer School of Business, Baylor University, Texas, USA, where he also received the Young Researcher Award in 1998. He returned to Ghana in 2000 to work as an economist at the Bank of Ghana. He rose from Senior Economist to Head of Department, and subsequently as Special Assistant to the Governor of the Bank. In June 2006, President J.A. Kufuor appointed him as a Deputy Governor of the Bank.

Dr Bawumia served as a Consultant to the Economic Commission of Africa from February to March 2009. From April to October 2009, he was a Visiting Scholar at the University of British Columbia Liu Centre for Global Studies and UBC Fisheries Centre.

In October 2009, he was appointed as a Fellow of the International Growth Centre (IGC), a research institute based jointly at the London School of Economics and Political Science and Oxford University that provides advice on economic growth to governments of developing countries, specifically serving as an IGC Team Member for Sierra Leone.

He also served as an Advisor to the Central Bank of Sierra Leone on the redesigning of the organisational structure of the Bank and its monetary policy framework. In January 2010, the African Development Bank appointed Dr Bawumia as its representative for Zimbabwe, a position he held until re-nominated as the Vice-Presidential Candidate to Nana Akufo-Addo on the ticket of the New Patriotic Party for the 2012 Presidential Election.

Dr Bawumia was selected by Nana Addo Dankwa Akufo-Addo as his running mate in the 2008 elections.

He was re-nominated in March 2012 as the Vice-Presidential Candidate to partner Nana Akufo-Addo for the 2012 elections. The Party won 10 seats in the Northern Region including Yendi, Walewale, Yagaba – Kubore, Bunkpurugu, Bimbilla, Chereponi, Kpandai, Tatale–Sanguli, Tolon and Zabzugu. It also won the Nabdam and Talensi constituencies in the Upper East Region although the presidential candidate, Nana Akufo-Addo lost the Presidential Elections to the incumbent John Dramani Mahama.

However, in the 2016 elections, the NPP emerged victorious with Dr Bawumia as the running mate.