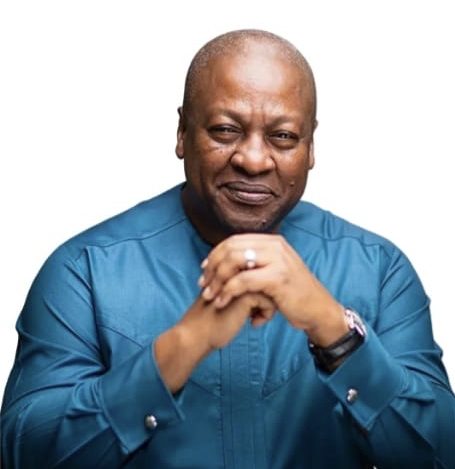 As a Presidential Candidate in 2020 general election, Mr Mahama says: “Our mission will not be complete until poverty is eradicated in our country, Ghana, until every child has access to quality and free education, until Ghanaian girls and women are genuinely empowered, until all Ghanaians are truly equal under the law, and until all of us live a meaningful life within an inclusive community.”

Who is John Dramani Mahama?

John Dramani Mahama was born on the 29th of November 1958 in Damongo, the then capital of the West Gonja District of the Northern Region.

His father, Emmanuel Adama Mahama, a prominent rice farmer was a Member of Parliament for the West Gonja Constituency and the first Regional Commissioner of the Northern Region under Ghana’s first leader, President Kwame Nkrumah.

John Mahama spent the first years of his life with his mother, Abiba Nnaba, in Damongo, before moving to Accra to live with his father, who imbued him with a strong passion for education.

He received his basic education at Achimota Basic School, where he began defending other children from bullies, and later moved to the Ghana Secondary School in Tamale.

He will later gain admission into the country’s premier university, the University of Ghana, Legon, receiving a Bachelor of Arts degree in history in 1981.

After his BA degree, John Mahama moved back to Tamale, where he taught history at Ghana Secondary School.

However, the political and economic situation in Ghana forced him to flee to Nigeria, where he rejoined his father who was in exile.

In 1983, he came back, with a strong desire to build bridges between people through communication, so he enrolled in a post-graduate programme in Communication Studies at the University of Ghana.

He graduated in 1986 and then went to Moscow, in the former Soviet Union, to the Institute of Social Sciences, where he received a post-graduate degree in Social Psychology in 1988.

While in Moscow, he noted the imperfections of the Socialist System and came to the realization that each nation had to find it’s own transformative way, away from ideological dogmas.

His book, ‘My First Coup d’État and Other True Stories From the Lost Decades of Africa’, published in July 2012, has won international praise for describing a world of love, fear, faith, despair, loss, longing, and hope despite all else.

He recalls in its first chapter the day in 1966 when he learned of the ousting of Ghana’s founding president, Kwame Nkrumah, in a military coup: “When I look back on my life it’s clear to me that this moment marked the awakening of my consciousness. It changed my life and influenced all the moments that followed.”

He has also written essays, which have been published in the “Ebony”, “Huffington Post”, “the New York Times” and “The Root.”

1996 marked the year John Dramani Mahama entered Ghanaian politics. He joined the National Democratic Congress (NDC) and, being an eloquent champion of the underprivileged, he was elected to the Parliament of Ghana to represent the Bole- Bamboi Constituency for a four-year term. He was re-elected in the elections of 2000 and 2004.

While serving as Minister of Communications, John Mahama was also the Chairman of the National Communications Authority, and played a key role in the stabilization and transformation of Ghana’s telecom sector.

Mr Mahama was nominated as running mate to Professor John Evans Atta Mills in 2008, becoming Vice President of Ghana in 2009.

He thus made political history by becoming the first Ghanaian head of state to have been born after Ghana’s declaration of independence on 6th March, 1957.

During his entire life and throughout his political career, Mr John Mahama has been a champion of the underprivileged, a unifier, moving above tribal politics: a strong supporter of public education for all: and a visionary, seeking to transform Ghana in fundamental ways.

During his Presidency, Ghana witnessed important transformations, the most important of which was the building of a more vibrant democracy.

Equally important, under President Mahama, Ghana’s ranking when it comes to the freedom of the press rose from 41st in 2012 to 26th in 2016, turning Ghana into a world champion of the free press.

All in all, John Mahama’s Presidency was a truly transformational one, with huge strides in infrastructural development.

My Heroes: “First, I must mention Dr. Kwame Nkrumah. Then, I admire Mahatma Ghandi for his calm disposition and his non-violence struggle. Mandela naturally is one of my heroes and President Rawlings for midwifing our 4th Republican democracy and giving me the opportunity to serve the people of Ghana, and then Professor Atta Mills. He is not only my hero but was my mentor.” -John Dramani Mahama.

Mr John Mahama, or JM, as he is popularly called, is a Christian, born and raised a Presbyterian but now a member of the Assemblies of God Church. He is a member of a multi-faith family consisting of both Christians and Muslims.

JM loves afrobeat music, he is a passionate reader and a consummate writer, and has vivid interest in farming, information and communication technology, and environmental issues.

Former President Mahama’s achievements between 2012 and 2016 cuts across all regions of the country.

For the Central Region, the Mahama administration completed 10 projects.

Some projects achieved by the Mahama administration across regions include Equipment for Metropolitan, Municipal and District Assemblies (MMDAs) – Local Government and Rural Development and handing over Of 500 vehicles to educational institutions across the country.

The rest are; buses and salon cars for Ghana Private Roads and Transport Union (GPRTU) through the Microfinance and Small Loans Centre (MASLOC) and 107 Beneficiaries Received YES Package – The Youth Empowerment Synergy (YES-Ghana).

Mr Mahama in his bid for a second term announced a $10 billion accelerated infrastructural plan, dubbed the “Big Push”, which he said would drive jobs and entrepreneurial agenda when elected on December 07.

“We are looking at what I call the BIG PUSH, injecting some $10 billion to dualise our roads, complete the remainder of the 200 Community Day Senior High Schools, finish all the hospital projects that have been left abandoned, and construct bridges to open up the country.”

Mr Mahama indicated that the main objective of his second coming was to create jobs for the youth of the country.

“I run for President because I want to leave a legacy: a solid infrastructure, with 100 per cent access for all. With this legacy, we will build a truly developed Ghana, on a par with the advanced nations,” Mr Mahama said.

“I know how to do it, part of it I’ve already accomplished, and since I know how to do it and the current government doesn’t, I feel I have the moral duty to ask for a second term. This is not about me, it’s about Ghana and Ghanaians.”

All in all, John Mahama’s Presidency during his first term was transformational and he hopes to use the big push project to accelerate Ghana’s socioeconomic development and to create more jobs for the youth.

When that bid is successful, he will become the first President to come back to power after serving a-four-year first term.