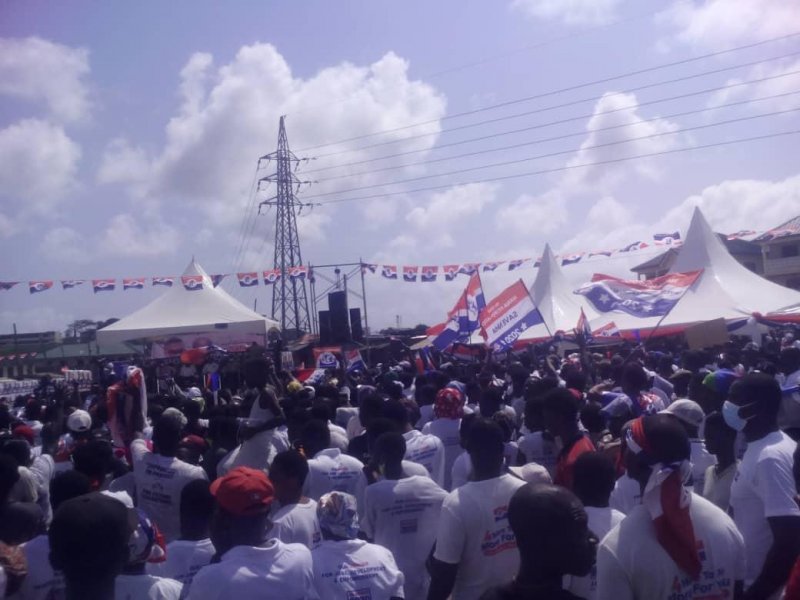 Mpohor (W/R), Nov. 29, GNA – The President of the Republic of Ghana and Flagbearer of the New Patriotic Party (NPP) Nana Akufo-Addo has advised the electorates of Kwesimintsim and Mpohor Constituencies against voting ‘skirt and blouse’ in the December polls to give him adequate representation in Parliament.

Addressing a separate mini-rally at the two constituencies, President Akufo-Addo explained that the nature of Ghana’s politics required the President to have adequate representation in Parliament for easy passage of bills and legislative instruments to make his work easier.

The mini-rally was part of his visit to the Western Region and to pay tribute to the late Anthony K. K. Sam, former Mayor for the Sekondi-Takoradi Metropolitan Assembly (STMA).

According to him, those claiming to be party stalwarts and yet asking for a vote for him and not the NPP’s parliamentary candidates were only out to undermine the fortunes of the party.

He said having a Member of Parliament (MP) like Dr. Prince Hammid Armah who is highly regarded by him could bring about significant development projects to the Constituency.

“This should be a source of encouragement to the people to vote the NPP parliamentary candidates into office”, he explained.

He mentioned some of the projects undertaken through Dr. Armah’s efforts as improved curricular in education and the Prince Armah Foundation.

The two candidates, Dr. Armah who is the Executive Secretary of the National Council for Curricular Assessment (NaCCA), and Mr John Arboah Sanie, parliamentary candidate for the Mpohor Constituency appealed to the electorates to have confidence in them and vote for them as they vote for President Akufo-Addo.