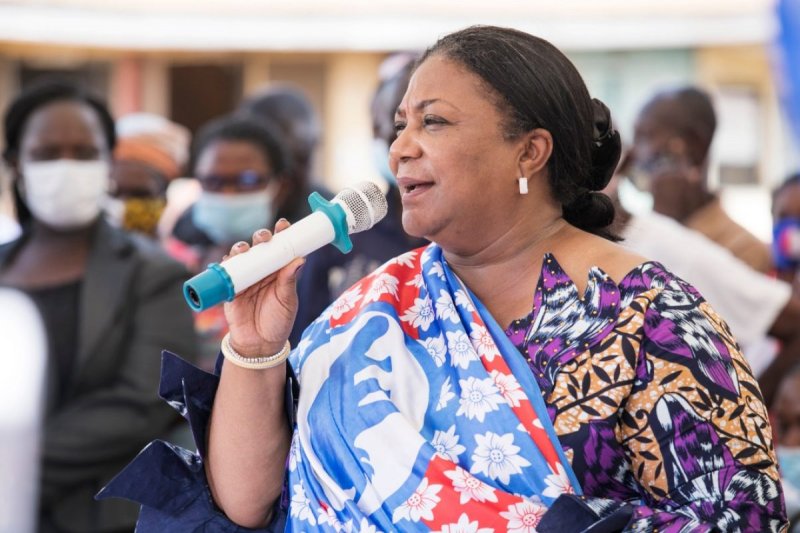 Accra, Nov. 30, GNA – First Lady Mrs Rebecca Akufo-Addo, has urged supporters of the New Patriotic Party (NPP) in the Ashanti region to go all out and vote massively for the Party on December 7.

She advised the supporters of the Party’s stronghold not to assume that the NPP would win in the region at all cost, asking them, to encourage each other to go out to the polls and cast their ballots.

She said every citizen who had benefitted from policies implemented by the Akufo-Addo Administration, should also go out to vote to retain the government, else, the many laudable policies that Ghanaians were benefitting from, risk collapse, in the unlikely event that another party won the election.

Mrs. Akufo-Addo said this when she toured the Ashanti Region as part of her campaign to garner votes for President Akufo-Addo and the NPP in the up-coming general elections.

She later attended a durbar of queen mothers and market queens in the Ashanti region at Ejisu.

In her interactions, the First Lady reminded the people that apart from introducing the Free SHS policy, which had benefitted every Ghanaian, the Akufo-Addo led-government had also impelmented the One District One Factory, One Village One Dam, Youth Employment initiative, NABCO, and several other promises made in 2016.

Additionally, she said, the economic mitigation measures implemented by the government in the COVID-19 era including free water and electricity supply had also benefitted every Ghanaian regardless of their political colour.

At the Manhyia Palace, Mrs. Akufo-Addo thanked the Otumfuor and the Asantehemaa for their continuous support for the President and the NPP government upon its assumption in office in 2017, and reminded them that the President during the period of his first term had worked hard to fulfil all his promises to the people of Ghana.

She said the Free SHS policy which many were sceptical about had materialized only because of the political commitment and competence of the Akufo-Addo administration.

Mrs Akufo-Addo, therefore, asked for the Otumfuor’s and Asantehemaa’s blessings for the NPP administration to be retained to continue the good work.

The Asantehemaa thanked the First Lady for her visit to the royal palace and prayed with her for a peaceful election, the outcome of which should advance the wellbeing of the country.

Later at a durbar with Ashanti Region Queen mothers and Market Queens, Mrs. Akufo-Addo said the NPP was the only political party, which always implemented policies which alleviated the economic hardships of women.

She said the NHIS and free maternal care under President J.A. Kufuor and the Free SHS and restoration of Nursing and Teacher Trainee allowances under the Akufo-Addo administration, had brought great relief to many families.

The First lady introduced the NPP parliamentary candidate for Ejisu, Mr. John Kuma, to the gathering and asked them to vote massively for him, stating that, “it is when the NPP wins more seats in parliament that the good work of the next Akufo-Addo administration can be expedited for the benefit of all.”