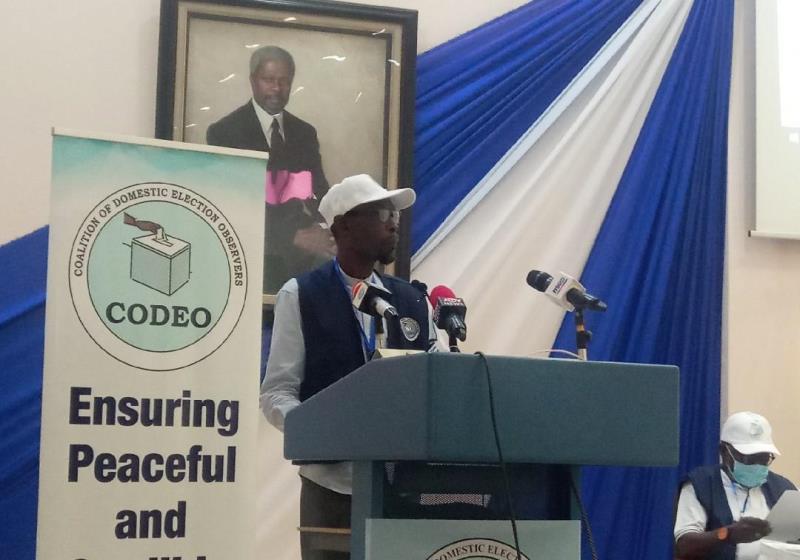 Accra, Dec. 8, GNA – The Coalition of Domestic Elections Observers (CODEO), has released its preliminary report on the December 7 Presidential and Parliamentary elections.

The report highlights CODEO’s election observation findings relating to the conduct of the Presidential and Parliamentary elections.

It is based on reports CODEO received on set-up and opening of polls, voting and counting of ballots from all 1,502 Parallel Vote Tabulation (PVT) Observers from every region and constituency as of midnight on Monday, December 7, verified and updated as at mid-day on Tuesday, December 8.

Shiekh Arimiyawo Shaibu, the Acting Chair of CODEO, who presented the report at a press briefing in Accra, said preliminary analysis of CODEO PVT Observer’s reports showed that the December 7, 2020, presidential and parliamentary elections were generally conducted according to Ghana’s electoral laws and procedures.

He said while there were some challenges, the challenges were isolated and did not undermine the process’s overall credibility.

The Acting Chair said as of midnight of December 7, CODEO had received results from all PVT nationally representative random sample of polling stations, 1,502, located in every region and constituency of the country.

Thus, CODEO’s data stabilized, making it possible to have out PVT estimates for the presidential election.

He said CODEO would release its PVT estimates only after the Electoral Commission (EC) completed its constitutional duty by announcing the official results for the presidential.

The report said from the PVT estimates, CODEO projected that voter turnout and rejected ballot rates would not go beyond 80.0 per cent and 2.0 per cent, respectively.

On violence/gunshot, the report said the 2020 elections had witnessed isolated violent cases in some polling stations.

It said for example, there were gunshots at the Modark Hotel and the Constituency Collation Centre, both at the Odododiodio Constituency in the Greater Accra region.

The report said the shooting incident left three people dead, and Mr Edwin Nii Lante Vanderpuye, the incumbent Member of Parliament, was reported to have been arrested together with some of his supporters; stating that they were granted bail early Tuesday morning.

Regarding destruction of property, the report said at the Fomena Constituency in the Ashanti region, some unidentified youth invaded and set the EC’s District Office ablaze in the early hours of

It said the youth attempted to enter the Collation Centre but were prevented by the security personnel on duty; adding that they turned their attention to the EC District Office and set it on fire.

The report said the Fire Service was called in and was able to douse the fire.

Concerning Collation Centre Challenges, the report said CODEO observers noted party agents’ refusal to sign collation sheets for a variety of reasons, including denial of a recount and discrepancies between total valid votes, and verified voters on the polling station results sheet in some constituencies, including Jomoro in the Western Region, Dormaa West in Bono Region, Zabzugu in the Northern Region; Assin, and Upper Denkyira East in the Central Region, and Fomena in the Ashanti region.

It commended the National Peace Council (NPC), the media, the political parties, voters, and citizens for the overall respective complementary roles during the exercise.

It acknowledged the generous support of the American people through the United States Agency for International Development (USAID), and financial support from STAR-Ghana, with funding from UKAID and European Union that made it possible for it to undertake the December 7, 2020 election observation exercise.

The report said CODEO continued to observe the post-election counting of votes and results collation processes with the deployment of observers to all the 275 constituency collation centers as well as at the National Results Collation Center (NRCC) in Accra.

It said in addition, CODEO had received data from all 275 constituencies that voted on Monday, December 7, completed the analysis, and had its PVT estimates for the presidential election results ready.

It said in keeping with the protocols, CODEO would release its PVT estimates for the presidential election results following the official announcement by the EC in order to provide independent verification of the accuracy of the latter.

It said CODEO PVT served as a powerful tool that ensured that the presidential results announced by the EC reflected the ballots cast at polling stations.

CODEO commended Ghanaians for the impressive turnout during the elections and urged all to remain calm and allow the EC to undertake its lawful duties, collate results, and declare winners of the presidential and parliamentary elections.

It condemned attempts by political parties to declare results before the EC’s official announcement.

“We urge all political parties and citizens to be law-abiding and remain calm as we wait on the EC to complete its work and declare the official results,” the reported added.