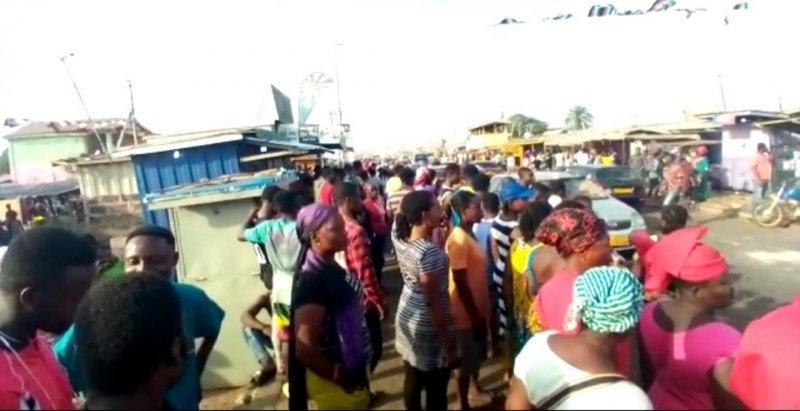 Mr Odamtten, the Ghana News Agency gathered, was on Monday, November 30, arraigned before a Financial Court in Tema where he was granted bail for some alleged financial malfeasance when he was the Metropolitan Chief Executive of the Tema Metropolitan Assembly.

He was however unable to meet the bail the conditions, leading to his detention in police cells.

The supporters, who were infuriated about the development and blamed the incumbent MP and candidate for the New Patriotic Party (NPP) Mr Daniel Titus Glover for instigating his arrest through utterances on political platforms, went on a rampage and destroyed NPP billboards and party properties.

They alleged that the incumbent MP had on many platforms alleged that the former Mayor, Mr Odamtten misappropriated funds and signed shady deals as Tema MCE and therefore called for his arrest.

Mr Emmanuel Ashitey, a supporter said, ” Why arrest our parliamentary candidate on the eve of Special Voting, we won’t agree to this dirty politics. We are here demanding a release of our candidate”.

Mr Kofi Anyako, Tema East constituency executive member of the NDC, said it was disheartening to note that a group of people were desperate for power and therefore using every means to win.

He said they were for peace but would resist any attempts by anyone to prevent the will of the people from manifesting as according to him, the youth had now decided to go for Mr Odamtten.