Voting going on peacefully in the Oforikrom Constituency 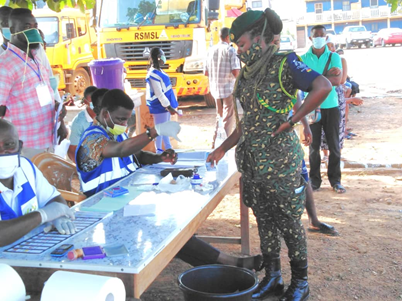 Kumasi, Dec 07, GNA – Voting is going on peacefully in the Oforikrom Constituency – an area with a voter population of 107,273, the third highest in the Ashanti Region.

There is a strong security presence and the comportment of the people, so far, has been admirable.

People were seen standing in long queues and patiently taking their turn to cast their ballot.

A little over two hours into the exercise, there has not been any incident at any of the polling centres in the area.

Things are not any different in the Subin Constituency.

At the Railways Police Station ‘3’ 37 persons, out of the 683 registered voters had already voted, an hour into the voting.

At the Justmoh Construction Polling Centre, 37 had gone through the exercise at the time the GNA visited and at A-Life Department Store, 63 out of the 381 people on the electoral roll had voted.

Two hours into the voting, 79 people had cast their ballot at the Abuakwa R/C One ‘A’ in the Atwima-Nwabiagya South.

At Abuakwa R/C Primary One ‘B’, 70 out of the 469 expected voters had successfully exercised their franchise.

At the Mallam Adam Mosque in the Asawase Constituency, 70 out of the 850 expected voters were done with the voting.

Mr Andrews Owusu Ansah Banahene, the Presiding Officer at the Urban Health Centre Garage ‘B’ in the Asokwa Constituency, told the GNA that all had so far gone well.

Out of the expected 463 registered voters, 42 had voted within the first hour of voting,

At the Urban Health Centre Agogo Two, 55 out of the 616 expected voters had turned out to vote.

Mariam Osei-Wusu, the PO at the Kyirapatre Nurses Quarters One Polling Centre, said 82 voted, had finished voting as of 0900 hours.

She added that they were expecting 335 people to vote there.