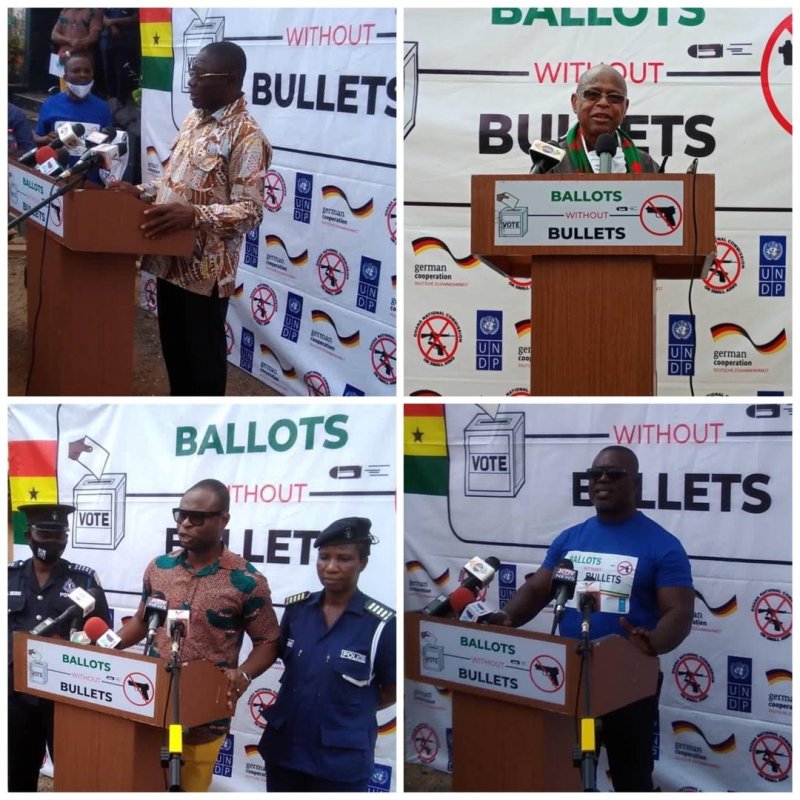 Ho, Nov 27, GNA – Major political parties in the Ho Municipality have pledged their unflinching resolve to ensure peace going into the December polls.

Mr Benjamin Kpodo, the incumbent Member of Parliament for Ho Central Constituency, on the ticket of the National Democratic Congress (NDC) and Mr Prosper Pi-Bansah, the New Patriotic Party (NPP) candidate, pledged support for peace, now, during and after the polls at the “Ballots Without Bullets Campaign” project in Ho.

Mr Pi-Bansah pledged on behalf of President Akufo-Addo and himself as the PC not to injure the prevailing peace.

He encouraged his supporters not to breach the peace, reminding them that casting one’s ballot was a process of using “thumbs without tools,” which cannot ignite violence.

Mr Kpodo entreated his supporters never to breach the peace as victory was on the horizon.

Detective Inspector of Police, Mr Michael Kwaetsu, who represented the Ho Municipal Command, urged all stakeholders to allow peace to manifest from within.

He said the Election Security Taskforce, headed by the Municipal Police Commander, was coordinating issues related to the elections to ensure a smooth electioneering process.

He called for greater tolerance and warned parties to desist from the act of defacing posters, which he said was criminal.

He said security officers were ready to mount all the 249 polling stations in the Constituency.

Mt Kwaetsu said the Police had a standby force likewise for sister agencies to quell any disturbances with dispatch.

Nana Oduro Numapau, Municipal Electoral Officer, said EC’s dealings with political parties had been transparent at all levels, saying electoral items were ready for use except the declaration forms.

He said about 1,500 election officials and COVID-19 Ambassadors were undergoing training and pledged the EC would deliver a free, fair and transparent election on polls day.

Mr Jones B. Applerh, Executive Secretary, National Commission on Small Arms and Light Weapons said the campaign was to remind Ghanaians about the proliferation of small arms across the sub-region and Ghana in particular.

He said elections were associated with violence which called for greater awareness creation and vigilance.

He said the campaign was across the country, especially hotspots as ascribed by the Police administration and urged all to work towards making the upcoming elections violent-free.

The Executive Secretary entreated Ghanaians to resort to peaceful resolution of issues no matter what happened.

The campaign is a collaboration between the Commission and the United Nations Development Programme (UNDP) with funding from the German Foreign Office.