Special Voting takes off smoothly in Amansaman, other constituencies in Accra 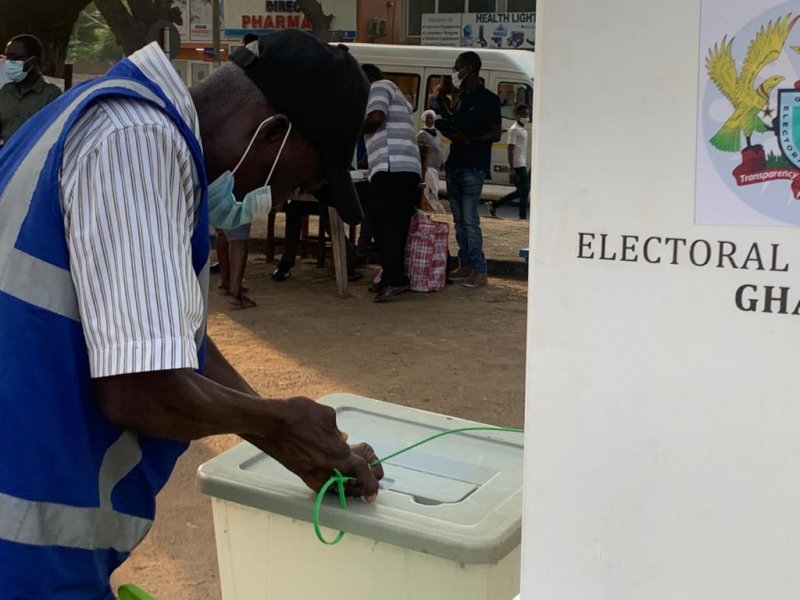 Accra, Dec. 1, GNA – The 2020 General Election “Special” voting has taken off on a smooth note in the Amansaman and other constituencies without difficulties in the Greater Accra Region.

The voting is progressing steadily with strict adherence to the COVID-19 safety protocols in the early hours of Tueday with the first person voting at 0702 hours at the Ga West Municipal Assembly Polling Centre.

A total of 496 voters comprising, security officers, media personnel, among others are expected to cast their votes in the Amansaman Constituency from 0700 hours to 1700 hours.

Officials from the Electoral Commission (EC), arrived at the voting centre at about 0600 hours to set up for voting to begin.

A long queue of voters was formed before 0630 hours.

Polling agents of the New Patriotic Party (NPP), National Democratic Congress (NDC) and the Ghana Union Movement (Gum) were seen at the Centre.

Mr Kofi Yirenkyi, Presiding Officer at the Centre, was hopeful that the process would be smooth to the end.

He told the Ghana News Agency (GNA) that the ballots would be kept safe at the Police Station until December 7.

Parliamentary Candidates for the NPP, Mr Akwesi Owusu Afrifa, and the NDC Mr Sedum Kweku Afenyo, were spotted at the Centre observing the processes.

At the M.A. Methodist Basic School Centre at Domeabra, in the Domeabra-Obom Constituency, voting started a few minutes after 0700 hours due to late arrival of election materials.

Mr George Mensah, Presiding Officer for the Centre, told the Ghana News Agency that a total of 21 persons, all security personnel, were expected to cast their votes at the Centre.

The GNA spotted agents for the NPP and NDC at the Centre.

At Kaneshie Police Station Polling Centre, in the Okaikwei South Constituency, voting started on time with personnel of the security agencies and other persons in a long queue to cast their ballots.
The Presiding Officer, Mr David Chinery, said 1,077 eligible voters were on the list.

He said the Centre had been put into two groups with group “A” having 538 voters on the list and group “B” 539 voters.

The GNA observed that COVID-19 safety protocols were being observed strictly at the two centres.

The situation is not different in the Weija- Gbawe Constituency, where voting started at 0710 hours.

At 0744 hours, 20 persons voted out of the 305 on the Special Voting list, in a smooth and calm atmosphere.

As part of Covid-19 protocols, contacts of voters were taken for easy tracing in case of any emergency.

At the Osu Police Station Polling Centre in the Korley Klottey Constituency, two centres have been created for the 914 persons on the Special Voting list.

Before 0700 hours, long queues were formed at both centres with strict adherence to COVID-19 safety protocols.

Mr Samuel Opoku Addo, Presiding Officer for the FO-Z Polling Station, told the GNA that 56 persons voted at about 0800 hours at the Centre.

A total of 829 voters are expected to vote at two centres at Nungua in the Krowor Constituency, with a relatively long queues formed at both centres as early as 0630 hours.